How Insurance Agents Can Target the Affluent with Facebook Ads 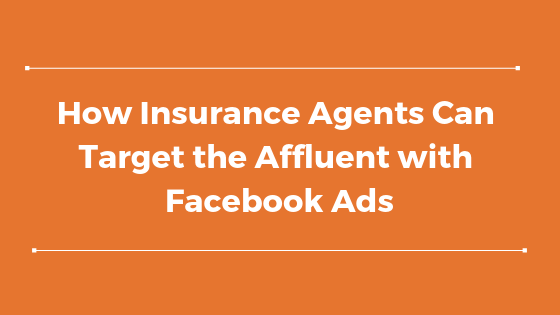 When I was 22 I made an assumption that nearly killed my brother and I.

We were snowboarding on Mt. Hood, racing down the mountain to try and get to the ski lift for one last run before it closed at 4:00 p.m.

We reached the lift at 4:03 p.m. Nobody was there and the lift wasn’t moving. So we had a choice: either take our boards off and hike up the way we just came or take a “shortcut” (you gotta love shortcuts in life!) through the woods in the “out of bounds” region.

I’d been snowboarding on Mt. Hood for 7 years so I assumed I knew the mountain well. I told my brother Ben, “If we just cut through the woods here we’ll pop out on the next trail and then we can ride that to the lodge.”

Well, that “assumption” resulted in us getting lost on Mt. Hood, a search party being sent out for us and us almost spending a freezing cold snowy night on the mountain.

We made it out alive (in case you were wondering!) but that experience taught me an important lesson: assumptions can be deadly, especially when you’re familiar with the terrain.

This is true in the mountains and in business… especially the business of marketing your insurance agency. Why? Because the more familiar you are, the more you’re prone to rely on assumptions and guesses instead of data.

And if you make erroneous assumptions about how to acquire your best clients you end up sabotaging your own success. And a common assumption I hear frequently is that:

“Affluent consumers are not on social media.”

Are Affluent Consumers On Social Media Or Not?

If it’s true that the affluent are not on social media then of course you don’t want to advertise there if that’s who you want to target.

But if high-net worth consumers really are spending time on social media, then you could be missing out on high quality leads and sales each month.

So it it pays to test out your assumptions. Don’t rely on your gut or the “experts” to tell you what reality is. And even though research should be valued over mere opinion, it’s even more vital that you test everything out in your own business.

Because at the end of the day it doesn’t matter what the latest “research” says if you can’t reproduce the same results in your agency, right?

In this article I am going to highlight what the latest research says about this topic. But then I’m going to show you how to conduct a real life test using Facebook ads so you can see for yourself if the affluent really are on Facebook or not.

After you read this article my hope is that you will let your own data play the most influential role in your marketing decisions. It’s ok to do research and consult the experts but don’t live and die by those things.

Speaking of research, let’s take a look at what it says.

What The Latest Research Says About the Affluent and Facebook

According to a 2015 study by Spectrem titled, “Using Social Media and Mobile Technology in Financial Decisions,” 21% of Ultra-High Net Worth (UHNW) investors (net worth $5M -$25M) check Facebook 2 to 5 times a day.

The study reveals that:

Here is an image from the Spectrem study showing the most popular social media sites for the UHNW: 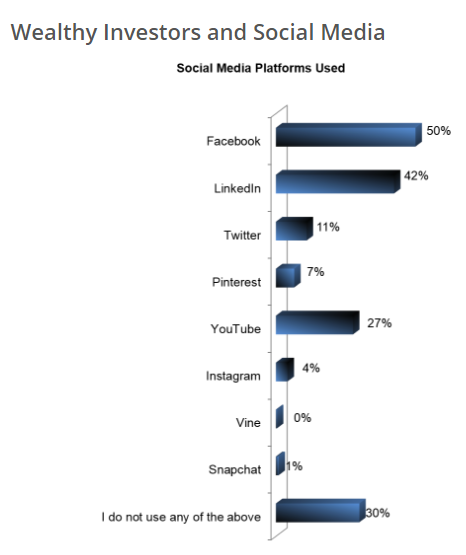 A separate study from the Pew Research Center revealed that “those living in affluent households are more likely to be social media users.”

Here are some reports and news articles if you want to go deeper on this topic:

But like I said. Even though the latest research confirms that the affluent are on social media, there’s even more important research to consider: your own!

For Just $100 You Can Test Your Assumptions Out on Facebook

So if you’re now persuaded to at least consider the possibility that the wealthy consumers you want to acquire are on Facebook, then the next step is for you to run what we call an “Audience Identifier Campaign.”

An Audience Identifier Campaign is simply a way to test out your assumptions with actual advertising data.

Note: At the end of this post you can get access to our 1-hour video training on How to Target the Affluent on Facebook but essentially here’s what you would do:

There are literally thousands of ways to target and segment your lists when running Facebook ads now. But you just want to come up with at least 10 audiences you can test. For example, you may want to target people with an income of at least $100,000: 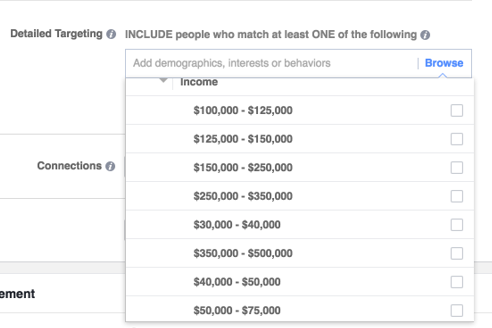 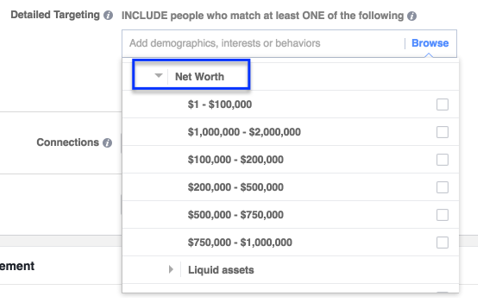 Or perhaps you want to target people who own at least 1 acre of land: 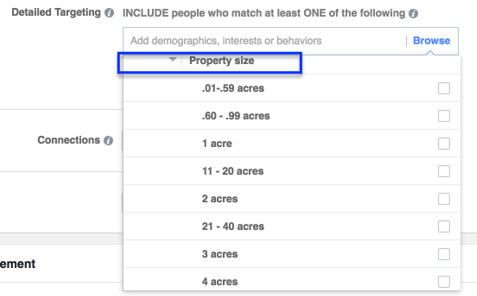 There are so many ways you can find the affluent on Facebook. These are just a few examples, again in the guide below I go into more detail on this.

Once you’ve identified the 10 audiences you assume would be good to target, and who would be receptive to your offer, then you create a piece of relevant content and pay to show it to the people who meet this criteria.

For example, the content could be a short video about 7 Mistakes Wealthy People Make with Their Insurance and How To Avoid Them.

You then run a video ad to all 10 audiences you identified to see who responds the best.

Step 3: Analyze the Results and Then Select Your Winners

We recommend you spend $10 per audience and let your ad run for 5-7 days.

At the end of your test check to see which audiences were the most responsive to your offer. If you notice 2 of the 10 were ultra-responsive then you’ve just found the 20% that will give you 80% of your results. Focus on those audiences to start with.

[Note: We have an entire module devoted to this topic in our Facebook Ads Bootcamp for Insurance Agents. Click here to learn more about the Bootcamp.]

Many agencies complain that the quality of the leads they get online are bad. “They’re just price shoppers and tire kickers!” Listen I understand, I sold insurance for about 5 years and I remember calling online leads we purchased.

But that’s not what I’m talking about here. There’s a big difference between a purchased lead and a lead you’ve generated. And how you go about generating that lead is going to determine the quality of that lead.

In other words, if you just put an ad on Facebook to everyone in your city then who knows who you’re going to attract!

However, if you do it the smart way and tell Facebook, “Hey, I only show my ad to people who meet this criteria. And please do not show it to these type of people.”

When you do this you significantly minimize the risk of attracting tire kickers.

But nothing is perfect: remember some wealthy people are that way because they’re penny pichers. So don’t assume that just because they’re a millionaire that they’re going to be an easy sell.

When Will You Test This Yourself?

Now you know that the latest research indicates that the affluent are on Facebook. You also now know how you can go about testing this out yourself.

So the only question I have for you is this: when will you do this?

You can either download the guide below to do it yourself or request a free Facebook Ads Strategy Session to learn more about how we can do this for you.

The choice is yours. But do something. Don’t just read this and move on. Otherwise you’ll continue to miss out on all the affluent leads you could be generating each month. 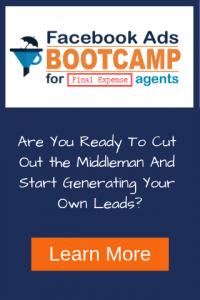